Sorry, I haven’t been around. I’ve been helping out The Boyfriend and dealing with what is probably a bad gallbladder. Life…. she took the reigns and drove me away from this little corner of Internet.

Now…. I’m hopefully back on track. 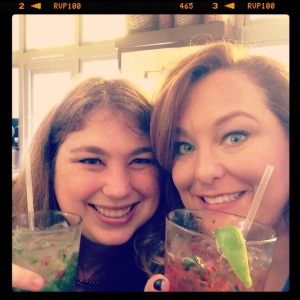 (A cheese-tastic ‘We have Fancy Cocktails’ Selfie! Left to Right. Maile and Me)

Last October 25th, I was in San Francisco. It was one of the trips that I  took with The Boyfriend and his company. I help out by booth set-up, fetching lunches and other Girl Friday tasks. When I’m not needed, I’m let to my own devices to explore. This time I met up with, Maile. She agreed to play tour guide.

First we hit Blue Bottle Coffee in The Farmer’s Market and then did some shopping. She found me in the hot sauce area.. and asked, “You like hot sauce?!” She grabbed my hand and we sprinted to the other end of The Farmer’s Market… within minutes a tasting spoon was in my mouth.

This little spoonful packed a flavorful punch… it was like nothing I had tasted before. A little sweet, a little smokey, a little herbaceous, some good heat… Heaven in a Bottle. It was the Spicy Mango Chili Sauce. A love affair began.

I immediately bought a bottle.

We continued our mission of adventure around San Francisco.

At the end of our journey.. I brought said bottle back to the hotel to The Boyfriend. After tasting, he wanted to know why I didn’t buy more. He, too had fallen in lurve with The Monkey Sauce!

A couple months ago, Bandar Foods had an internet giveaway. I enter on all the social media sites I could… never thinking I’d actually win. I got a text from Maile (she entered, too) saying I won. It was a happy day!! The boyfriend was so relieved… he had finished the bottle the night before.

Shortly, there after my mailbox was full of tasty goodness. The three sauces we’re mine all mine.. (Okay… I shared them with The Boyfriend!)

(The Sauces and Ned. Ned works for The Boyfriend. He was in San Francisco, too, but never got out of the convention room. Ned might be kissing the Spicy Mango… just saying’!)

Let me tell you about the sauces:

Sweet Mango Chili Sauce: (You’ve read a little so far!) It’s awesome. We eat this on so much stuff. We’ve put it on eggs, a slice of cheese, stir fries, rice & beans, a spoon. I’ve put in salad dressings, in curries, and in asian-y peanut noodles. Maile and I might have brought it to a Bachelorette party and slathered it on onion rings, fries and fried mozzarella sticks.

Every friend that we have try it… Loves it. Our fridge will never be without…

Tangy Tamarind: I’ve only recently be exposed to the awesomeness that is Tamarind. Where has this flavor been all my life? I was so excited to get this sauce. And I wasn’t let down. It’s sweet, tamarindy and tangy.. just like the name says. It reminds me of a fig preserve, perhaps because of the slight earthiness. Another winner for The Bandar Band of Flavor Masters! I’ve mixed this with Lee Kum Kee’s Garlic Chili Sauce, put it one some chicken and bake it… SOOOOO GOOOD! I’ve been know to put it on grilled cheese. I’ve also had it on Chicken McNuggets. (Don’t judge!)

Mint Cilantro Chili Sauce:  I would love to taste this. Unfortunately, cilantro sends me into fits of gagging. (Pleasant, right.) I wish I liked it. This article explains why. So, to get over this hurdle, I employed the taste hole of The Boyfriend. He loves cilantro! Here’s what he had to say: “Very tangy. An even taste of mint and cilantro. It would go wonderfully with citrusy grilled lemon chicken. A little bit in a salad dressing would lend a fresh, bright flavor. There is a slight little after burn.  Very fresh tasting. I want this on gyros, falafels and  a  grilled vegetable sandwich.” From his description I think a snack of hummus and pita bread would be another fabulous use… I’m see a trend of Middle Eastern foods that this would be good on..

Bandar has also come out with 2 flavors of Lentil Chips and a Masala Ketchup!

There you go… a review of some amazing sauces by some wonderful folks.